The annual KBCO Boulder Kinetics race was a Coloroado tradition for over 25 years.  The concept seemed simple (at first):  build a human-powered amphibious contraption and race it across a 5 mile course, half land and half water.  The event was well publicized by Boulder's popular KBCO radio station, and crowds of over 30,000 people were common.  In 2001, after hearing about the race for two decades but never attending it, I decided to enter.  I love building things, especially machines, and the idea of racing my invention in front of a big crowd was too good to pass up.  Unfortunately, (actually, fortunately), race day 2001 came and I was no where near ready.  I had to take in the race as a spectator, rather than a participant, and, seeing the spectacle for the first time, I realized it was a lot different than I had imagined it to be all of these years.  The machines were human powered, some single person designs, one with 10 people on board, most were pedal driven and used either paddle wheels or propellers in the water.  What I didn't expect was that each of the crafts was dressed up and decorated as a cartoon or animal or something.  The whole event looked more like the floats in the Macy's Parade than the hard core physics experiment I had imagined.  There was one poor schmuck who, like me (almost) had entered a no-nonsense, purpose built vehicle and he was taunted mercilessly by the half drunk crowd.  I learned that day that if I were to enter this race, I was going to have to dress my invention up and pretend like I was doing this for fun.  I was even more disappointed to learn the first place trophy isn't simply given to the craft that finishes first in the race, but that the overall winner is chosen based on things like "spirit" and costumes and a skit you're supposed to perform (as well as your place in the actual race).  Humbug!  All I wanted to do was build a contraption that would out run everyone elses.  I almost quit, but I had a half built design in my garage, so I figured I'd finish it, dress it up enough that it would fit in, not enter the skit or any of that non-sense, and just win the race. 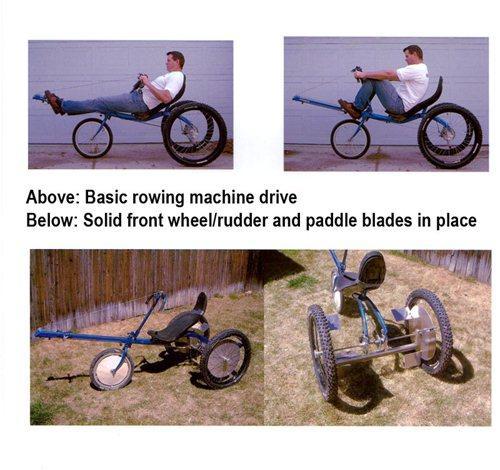 When the 2002 race came around, I was set.  I had built a rowing machine powered, paddle wheel driven racer that I thought was really slick.  Like most back-yard mechanics, I based my design entirely on gut instinct.  I didn't have the time, money, (or interest, really) to do my physics homework or create a computer model. 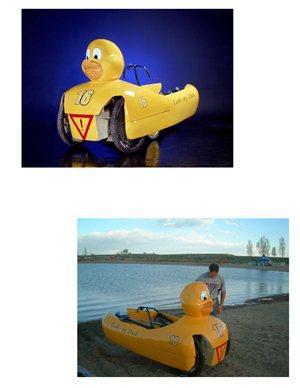 I had decided (incorrectly) that the rowing machine motion would be a big advantage over the pedal driven machines because I would be using my upper and lower body to propel my craft.  I'd done a little sculpting and a ton of fiberglass work (see Car Project) so I was able to make the whole thing look like a giant rubber duck.  It was super fast on land ( I could average 16 mph for 30 minutes, much faster than even the fastest thing I'd seen in the 2001 race).  But, I didn't test it much on the water. 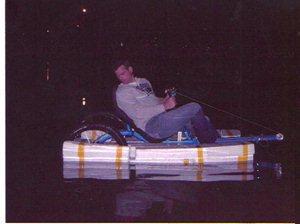 The best I could do was to get out onto one of the Washington park lakes in the middle of the night (being on those lakes was illegal), so water testing was limited. to say the least.

About ten seconds after the starting gun fired, I realized I was in deep trouble.  The race starts with all of the crafts on the edge of the beach at Boulder resevoir, facing the water.  The first part of the race is about a one mile section of water to the boat ramp on the far side of the resevoir.   As soon as I got in the water, I realized how bad my design was.  I may have been the fastest design on the land that year, but I was definitely the slowest in the water.  The paddle wheels were way too small, and they were over half submerged below the water, which meant I was pushing a lot of water up and down as I tried to go forward.  The hull design was horrible, too.  It was shaped like a horse shoe with its open end foreward and had the hydrodynamics of a brick.  One by one every single vehicle passed me, including four girls on a stack of mattresses with canoe paddles.  I was in dead last by the time we were 200 yards into the race, and it took me nearly a half hour to complete the first one mile leg of the race.  I did well on the land legs of the race that day, but quickly fell way back on each of the water segments.  I ended up 20th out of about 50 racers (I did end up beating the girls on the mattress, who dropped out to sun bathe about half way across the resevoir), and the judges liked the look of the machine, so I got an award for that, but I didn't get what I came for, I didn't win. 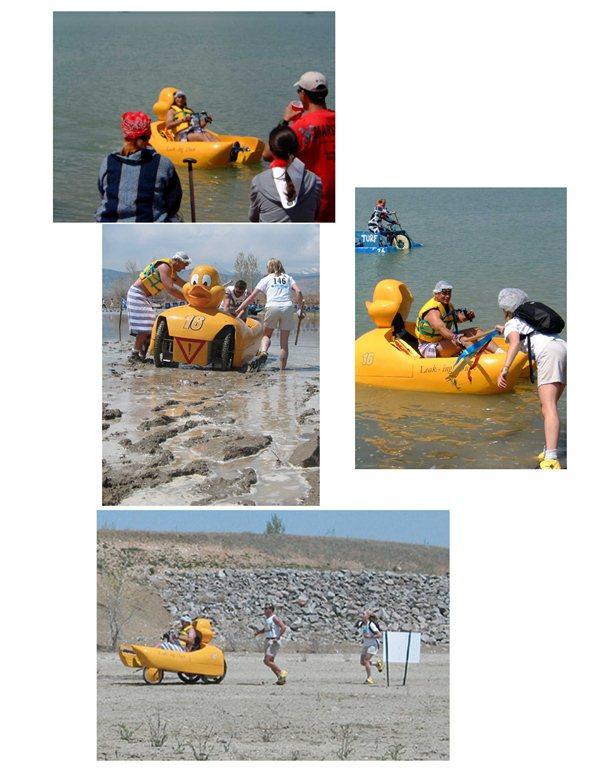 I sat out 2003, and for 2004, built a two person machine that my wife and I could race together.  It was incredibly complicated, with pedal and rowing machine drive, and paddles that rotated around on conveyor belts so they could pull over a longer distance, and the hull was long and thin.  It was pretty fast on land, and, again, I didn't test enough in the water.  On race day, we held our own for about a half hour, and then stuff started to break.  By the end of the first water section, we had lost about half of our paddle blades.  We did great on the first land section, but in the second water section, the drive on the right conveyor belt broke.  With only the left belt working, we had to rudder hard to go straight.  It was agonizingly slow.  On the second land section, we bent a wheel rim and our goose was officially cooked.  We waited two hours to get towed back to the beach.  No trophy for 2004, just a bad sunburn.  Needless to say, my wife never participated in another Kinetics race with me. 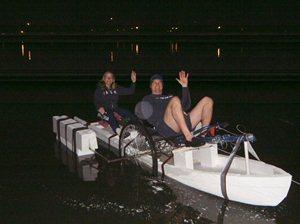 They say that success is a mixture of brains and perseverance.  I decided that what I lacked in the brains department, I'd make up for with perseverance, so I went back to the drawing board and built another machine for 2006.  This machine was basically a bike on a set of pontoons.  It used a propeller in the water and rode like a bike on land with the two pontoons up in the air.  The 2006 craft was quick on land and water, but required a lot of time to convert from water to land configurations.  I got 4th in 2006.  In 2007, I made it easier to switch from water to land and, finally, had a winner!  I was in 1st place by a long shot at the end of the second land section, then broke a prop mount but was able to limp along and still get 2nd.  The prop mount was a simple fix, so I figured I had the 2008 race in the bag when I learned that, after 27 years, KBCO decided to cancel the race all together.  I guess they were loosing money on it.  I've learned that there is a "world chamionships" of Kinetics in California...maybe I'll take a long weekend and try that one year.